races go from newest to oldest! 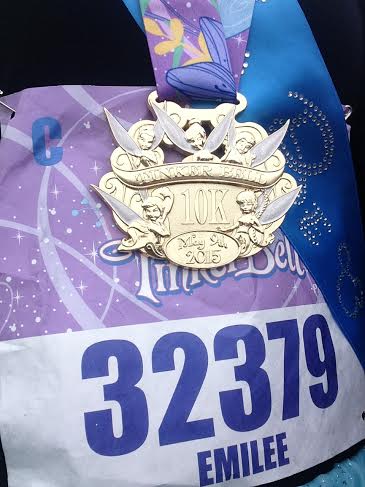 MY FIRST RUN DISNEY RACE!!!!!!!
AAAAAAAAAAAAAAAAAAAAAAAHHHH!!!!
It's crazy how far in advance you plan for this race, or Run Disney races I guess. But finally!
It also turned into my Bachelorette party too, since 3 of my bridesmaids where going...might as well!
We got to Anaheim on friday, the day after the Expo and I was already nervous hearing about how merchandise flys off the shelf for the first day.
We got our bibs and shirts first, I got a small and it fits perfectly. The bibs are cute too with all the fairy's on it and your name! I pre-purchased a necklace which I love and I got that with my bib and I pre-purchased the Dooney and Bourke letter bag and got in that line after which went fast. I debated between a purse and shoes, and since I wouldn't want to really run in the shoes I got the purse. But the tinkerbell shoes where soooo cute!
We did't rest for this race, we where out til midnight friday! I think I got really 3 hours of sleep. I was so excited for the race! We stayed at the Best Western Stovalls which was great for us, only 2 street lights away from Downtown Disney so it really wasn't a long walk i'd stay there again.
We dropped 1 bag off at bag check and there was no line, took some pics and then got into corral D, for some reason we where all placed in different corrals but it wasn't a big deal we knew we would be walk/running it anyway. I wish they had speakers throughout the corrals, we couldn't hear the enouncer until we where closer.
But it went fast and we where off! I was really hoping we could get some pictures with the fairies, and we did! We got 2 of them, the line for Silvermist was super long and I wanted her the most! But she waved to me as I went by which was cool enough :)
I was bummed Tinkerbell, Captain Hook or Peter Pan weren't out I saw only 4 character spots. Mary Poppins was one of them I think...or Alice...one of those two!
I was so nervous as we where going people that worked kept shouting out how ahead we where! Ah! We really didn't want to get sweeped and I was so confused how people where still in these long lines hearing how close the sweeps are! So odd! But we made it!
We got our medal and a banana, they didn't have any food boxes. Both Ayre and Brandi who did it with me have done a few Run Disney races and told me stuff ahead of time. So they must've ran out...

Overall: I am so happy I did a Run Disney race with friends that have done it before, it's much less stressful since they're so big and busy. I enjoyed the 10k course but was bummed we didn't run through the castle! We ran by it...But of course I would do this race again and I'm hooked!!

Tips: If you want to run in the same corral you can get it changed. And getting to the Expo the first day it opens is best. There was still merchandise but not the best selection. The shoes and purses though are worth it!!! 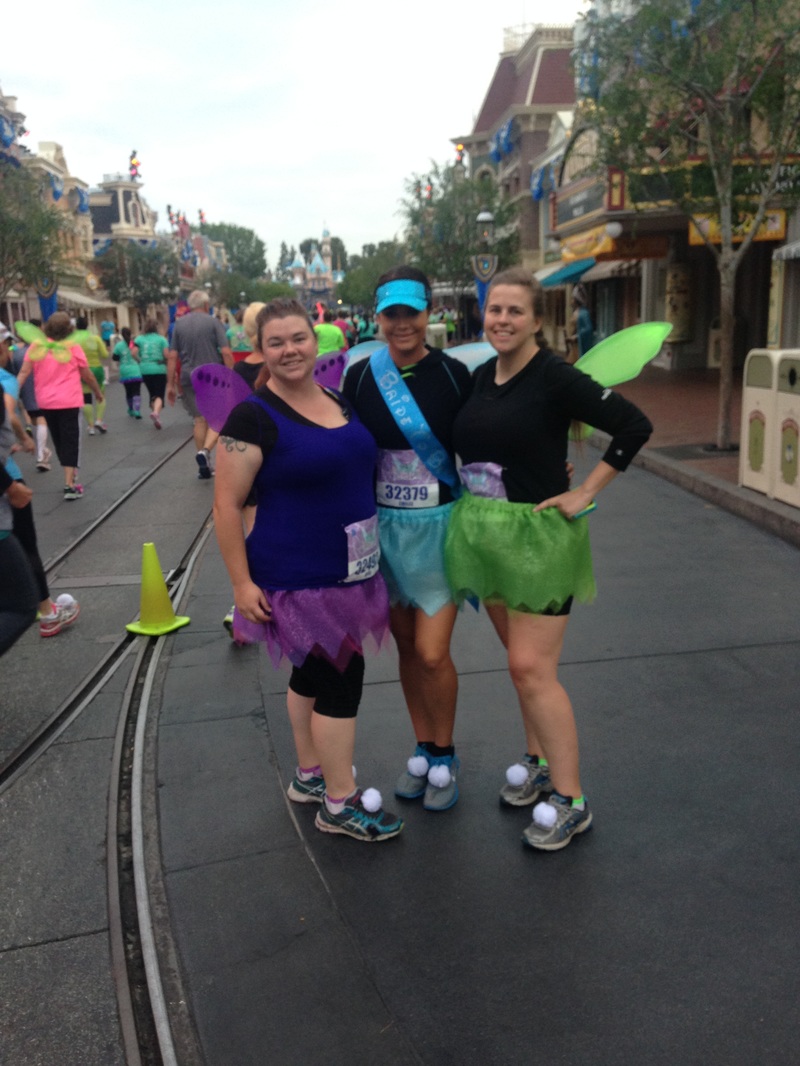 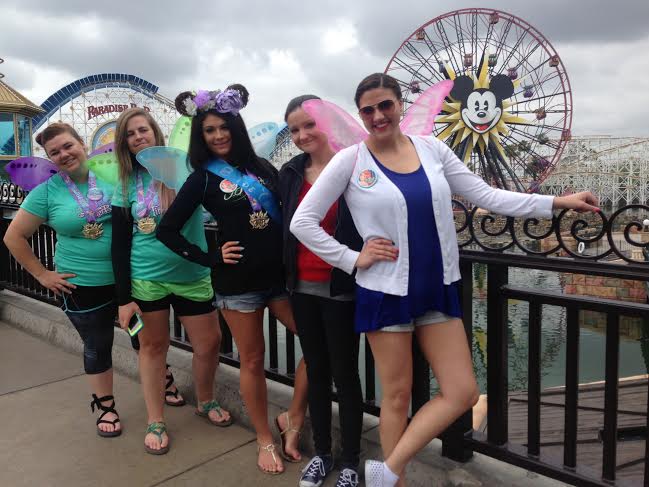 Hearbreaker Half Marathon, February 15. Portland, OR. 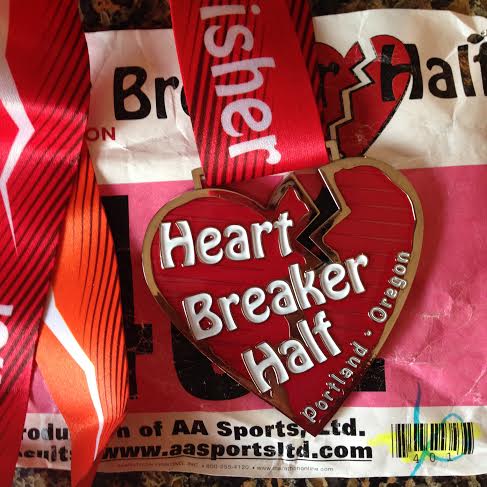 The Half that killed my knee.
I felt fine after the Half in January, maybe my hip flexor was sore but not my knee!
I stayed with my Aunt again who drove me to the race, it starts and ends at a highschool so parking wasn't bad, but i'd still get there early.
They had small expo in the gym where you get your bib and shirt. They sold some cute stuff, my Aunt bought me a cute running skirt which i'm going to wear for the Wine Country Half in August. They also had food, and those KT tape booths with a representative tapping people. I regret not getting that on my knee.
I knew this race was hilly but how hilly i wasn't ready for.
We started off going down....then up....then down....then flat...oh man it was crazy! And part of it is looped to for the Half runners so you run the course you just ran which is like this odd tease as you see where you turn to head to the finish but you gotta go the other way to loop back around. Rude.
My knee started killing me after running the last major downhill at like mile 9 and I had to speed walk/gimp/limp the rest of the race.
I've never felt such pain in my knee...like knives stabbing me. Oh it hurt so bad and scared me half to death.
My Aunt saw me limping around the finish and ran to see what was up, i started crying telling her about my knee as she walked with me through the finish.
It's odd they don't give you your medal at the finish, you go back inside the gym to pick it up and that point I just wanted to leave. Keep the dang thing i'm dying!!!
I spent the rest of the day icing my knee and being scared I really hurt it.
After talking with the doctor (my Mike) he figured out it's runners knee. I stayed off it for 2 months or until the Tinkerbell 10k. Which I did!! and did other workouts and looked on various running websites about runners knee therapy. And as i type this today (5-16-15) my knee is doing GREAT!

Overall: This race is very hilly, prepare for that! and that you'll be doubling part of the route which is something i like to avoid. The water stations where just ok and bring fuel! I don't remember snacks at the end but they might have run out by the time I finished. I also really liked the shirts for this race!

Tips: train for hills and mind your knees! 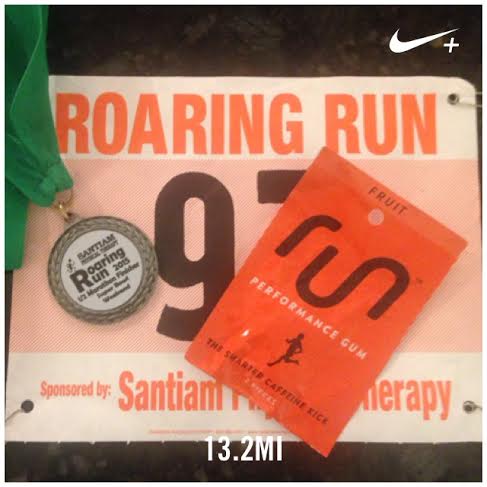 I set a goal in 2015 to run a Half Marathon every month to celebrate being in Oregon one last full year until Mike is done with residency.
The Roaring Rapids Run looked good to me for the price and the distance, closer than Portland!
Scio is a cute little country town so it was nice running in a less-city like atmosphere which is what i'm used to, I live in the country too so running on roads by cows is more common to me than on sidewalks passing house after house.
It was easy to find and you can take a free shuttle from the school (which is what I did) or try and park at the park it starts and ends at. Honestly I could've parked at the park and stayed in my car until the race, which i would do next time, there was plenty of parking and the race is small.
It was so cold that morning, the coldest race I have ever done. Thankfully they had a fire pit going that runners where huddling around.
I met and talked to some other Half distance runners, there was a 5k and a 10k as well which where way more popular than the Half.
The start was a little confusing since you run one direction to basically turn around we where all standing around asking "is this the way?" but once people started huddling it was easy to figure it out. For the first few miles I couldn't feels my toes at all and it was making me nervous not knowing exactly how I was landing.
The course was great, flat and by cows and farms so it was really relaxing. I thought the water stations where ok but kind of oddly placed. The finish was nice too, you run under a little covered bridge that had a photographer at the end to take those oh so lovely race pictures.
The finish area was pretty simple, I don't remember the snacks but it was good! The medal is cute and small, what you expect from the price.

Overall: I enjoyed this race. It's small, flat, inexpensive, not in busy Portland, good parking. It's a good one to do if you plan on doing some larger races later in the year.

Tips: Maybe bring your own water and definitely fuel. It can be cold! Prepare for that.